As this blog gets under way, I'm striving to make every Tuesday a tasty one by posting snack and foodie ideas for team moms and team parents alike.

I do promise that I will have healthy snack posts as well, but today starts with a little tribute to baseball.  For much of the country baseball is just getting under way, for those of us on the west coast, baseball is just ending.  In this limbo area of seasons coming and going, why not post a fun cupcake idea?  Cupcakes are great for season end parties and are also fun treats for the team during the season.

This cupcake idea is one of my favorites.  You'll see a combo of two different cupcake decor ideas.  One was inspired by a pin on Pinterest using red M&Ms to create red baseball laces on white icing.  You can view the inspirational pin here.  I originally had the thought to just pick the red M&Ms out of a bag and keep the other colors for a sweet treat at home.  After that 5 second thought passed, I picked up a bag of only red M&Ms at my local party store.  These can also be found at many local candy stores.  (Side note, if you do feel you want to sort through the bag and pick the red ones out... consider picking the green ones out as well to create 'grass' cupcakes to go with the baseballs.)

Arrange the red M&Ms in an arc on each side of the cupcake to create a baseball effect.  Easy peasy!

But wait, that's not all.  What I really wanted to share was the fun cupcake topper idea we used for our end of season baseball party.  Surely someone on your team (most likely you if you're the team mom) has taken several pictures throughout the season.  A simple and inexpensive way to jazz up your cupcakes is to print an action photo of each player on a thick photo paper or card stock and cut around the edge of the shape.  Easily attach these to lollipop sticks with a small dab of hot glue and voila - you've got cute, action packed cupcake toppers that the team will love.  Each player will enjoy finding their picture and eating the cupcake attached to it.

Have fun spicing up your team's cupcakes. 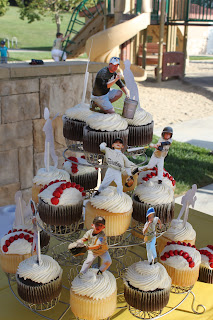 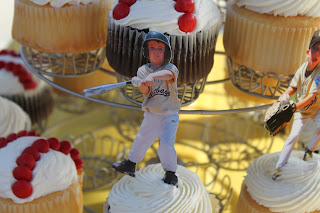 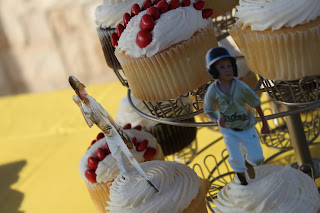 Here's another fun action shot atop a cupcake from a soccer season as well. 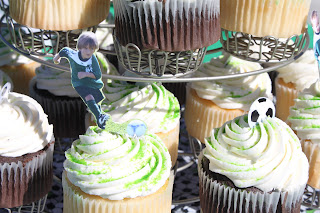